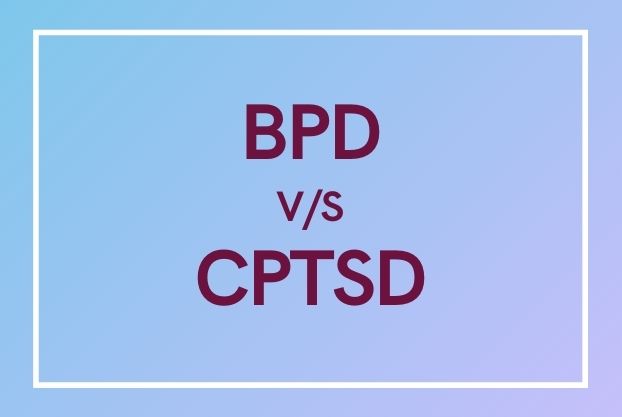 Complex Post-Traumatic Stress Disorder (CPTSD) is a relatively new term, meaning that not many professionals know how to identify it much less how to treat it. It is often mistaken as or misdiagnosed as Borderline Personality Disorder (BPD). While the causes of CPTSD and BPD might overlap, there are some key differences, which means that the method to treat them are also different. Misdiagnosis is common- majorly due to the lack of knowledge about the differences between the two.

With BPD, you might see patterns of instability in your relationships, struggle with self-image and identity, and be very impulsive. For a BPD diagnosis, you would have to show five out of nine of these symptoms:

CPTSD is a result of repeated trauma from abusive childhoods, war, torture, kidnapping or any prolonged traumatic event. Those suffering from CPTSD often have more difficulties in relationships in comparison to those with PTSD. The symptoms include, but are not limited to:

The treatment for CPTSD is similar to that of PTSD but there is more focus on the interpersonal aspect- this means there is an effort to build trust and manage feelings of shame and guilt instead of lashing out as a reaction.

What are the key differences between BPD and CPTSD?

The overlapping symptoms often means that a misdiagnosis takes place. A study in 2018 showed that 24% of those with PTSD also have BPD, while 30% with BPD have PTSD. Since the method of treatment differs, it is important to identify as accurately as possible.

The key differences between the two are:

As an organization, Another Light does not tend to “diagnose” per se, as symptoms can often blend into each other. Some with CPTSD may show traits of BPD, but that might not mean it is indeed BPD. It is important to have an informed therapist- preferably a trauma therapist- to understand these differences and create a treatment plan accordingly. Another Light specializes in trauma-informed therapists who provide a safe space for you to process and heal.