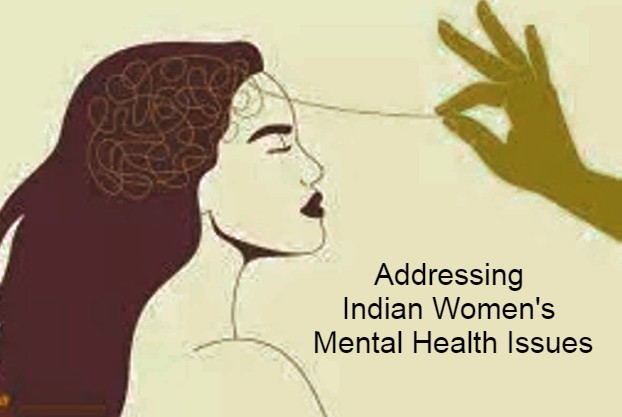 There are pronounced psychological and biological differences between men and women. Different hormones from those in men are infused into the female brain. The male brain is covered with testosterone, whereas the female brain is steeped in estrogen and progesterone. Estrogen enhances a woman's ability to empathize better than men and makes her more sociable as well as making her feel what others feel.

A significant factor in both mental wellness and mental illness is gender. Women experience psychological anguish and psychiatric disorders in different ways than males do. Men exhibit higher mean levels of externalizing disorders than women do, with internalizing disorders being more prevalent in women. Women made up the majority of those who had mental health issues in India as of October 2021, with rates for stress and anxiety disorders of 39% and 30%, respectively.

Women are more likely to suffer from mental illnesses than males do, and this may contribute to the higher prevalence of anxiety and despair among women. Girls from nuclear households and young brides are more likely to try suicide and damage themselves. The occurrence and progression of mental diseases in female patients are influenced by social and gender-specific factors. The paucity of resources for women is one factor in the low attendance in hospital settings. In India, over two-thirds of married women experienced domestic abuse. Consistent efforts can enhance the lives of Indian women and their mental health by bringing about change on social, political, economic, and legal levels.

Socioeconomic limitations, loss of control over their sexuality, immobility, fear of early marriage and motherhood, and rising harassment are a few of the apparent causes. In addition, they are socially and family pressured to meet basic demands like education and independence.

Their options for employment, particularly in lower-paying positions, are less lucrative than those accessible to males. Such abuse has a negative impact on a person's mental and physical health. The difference between the binary genders has long been socially defined and viewed through a sexist lens. Men assumed dominance over women in such a system, maintaining their superiority. As a result, we have historically undervalued the contribution that women provide to society. These circumstances cause the women to express feelings of self-hatred, self-pity, and self-criticism.

The challenges of women's rehabilitation are exacerbated by social implications such as marital, and family abandonment, homelessness, vulnerability to sexual abuse, and exposure to HIV and other illnesses. Women with serious mental conditions experience sexual and physical abuse at rates twice as high as those seen in the general female population. In India, the stigma associated with being a severely ill woman as well as the lack of any clear policy for their welfare only make the situation worse.

Female feticide (selective abortion based on the gender or sex selection of the child), domestic abuse, dowry death or harassment, mental and physical torture, sexual trafficking, and public humiliation are among the frequent types of violence against Indian women. Wife battery and female suicide have been connected to the reproductive duties of women, including their expected role of having children, the effects of infertility, and the failure to deliver a male child.

The aftereffects of gender-based violence are grave and include poor reproductive health, post traumatic stress disorder, and lifelong emotional misery. Depression, anxiety, post-traumatic stress disorder, insomnia, alcohol use disorders, as well as a variety of somatic and psychological ailments, are common mental health issues faced by abused women. In conclusion, women experience an alarming amount of violence as children and adults, and the consequences are frequently severe and long-lasting.

The number of female psychologists in Mumbai and other parts of India is on the rise in recent years. They have made a substantial impact on a number of psychiatric fields, including child psychology, community psychiatry, the treatment of schizophrenic patients, and issues relating to women's mental health. The Indian Psychiatric Society has 2829 members overall, with women psychiatrists making up 14.6% of those members. They make up roughly 10% of fellows and 20% of regular members; a member of the society can become a fellow after five years of psychiatric practice following graduation.

Another Light Counseling's founder Aanchal Narang, has lectured at institutions including Whistling Woods International, and even worked with palliative care patients at the Make-a-Wish Foundation. She has experience working with a variety of LGBTQIA+ clientele and oversees the phone line for the LBT queer feminist organization LABIA.

Another Light Counselling, a mental health organization with many female psychologists in Mumbai, specializes in trauma counselling, gender, sexuality, addiction, and kink-affirmative therapy, is one such organization that understands the grave effects mental illness has on women. Counsellors in this set focus on the client's behavior, beliefs, and desired relief rather than solely on diagnoses in order to make the deepest repairs and bring about a lasting, positive change in the client's life. In order to foster holistic healing for their clients via steadfast support and compassion, Another Light Counselling fully integrates trauma knowledge into all areas of mental health services and trains employees to detect the symptoms of trauma.

It is crucial to realize that social, political, and economic challenges that are prevalent in society always affect women's mental health. Our female psychologists in Mumbai make sure that ladies in need of assistance are informed about and assisted in pursuing a life that is both emotionally and physically healthy.

It's crucial to have a place where you can express all of your feelings without worrying about being criticized or made fun of. You often feel condemned when you express your views, which prevents you from doing so frequently. You can find the proper ears that listen to you without judgment by visiting one of our counselling psychologists in Mumbai, who will also give you a place where you can express yourself.

You might have periods of feeling shattered, lost, and hopeless. You can discover that you are lost in direction. You may find yourself not able to find a direction. Our female psychologists in Mumbai are here to help you in moving towards the right path in life, giving you guidance, and direction to move on, and helping you find a purpose in life.

The route you follow to improve your life is counselling. Counseling can help you find your purpose and live a happier, healthier life in addition to allowing you to vent your thoughts. The effectiveness of counselling in a variety of domains is supported by a multitude of reliable, scientifically based studies. Counselling offers hope, healing, and wellness to anybody willing to attempt it, from treating mental health disorders to fostering community growth.